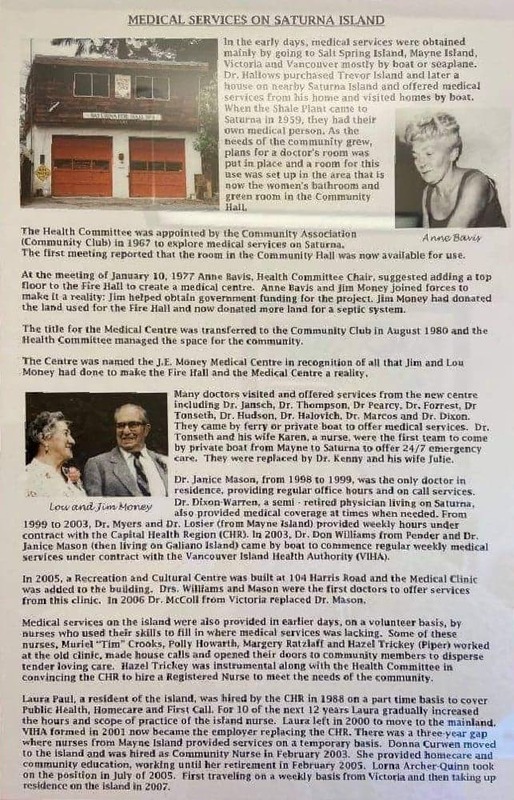 A write-up about the Saturna Medical Clinic.
As follows;

In the early days, medical services were obtained mainly by going to Saltspring Island, Mayne Island, Victoria, and Vancouver mostly by boat or seaplane. Dr. Hallows purchased Trevor Island and later a house on nearby Saturna Island and offered medical services from his house and visited homes by boat. When Shale Plant came to Saturna in 1959, they had their won medical person. As the needs of the community grew, plans for a doctor’s room for this use was set up in the area that is now the women’s bathroom and green room in the Community Hall.

The Health Committee was appointed by the Community Association (Community Club) in 1967 to explore medical services on Saturna. The First meeting reported that the room in the Community Hall was now available for use.

At the meeting of January 10, 1977 Anne Bavis, Health Committee Chair, suggested adding a top floor to the Fire Hall to create. Medical Centre. Anne Bavis and Jim Money joined forces to make it a reality; Jim helped obtain government funding for the project. Jim Money had donated the land used for the Fire Hall and now donated more land for the septic system.

The Centre was names J. E. Money Medical Centre in recognition at all that Jim and Lou Money had done to make the Fire Hall and the Medical Centre a reality.

Many doctors visited and offered services from the new centre including Dr. Jansch, Dr. Thompson, Dr. Pearcy, Dr. Forrest, Dr. Tonseth, Dr. Hudson, Dr. Halovish, Dr, Marcos, and Dr. Dixon. They came by ferry or private boat to offer medical services. Dr. Tonesth and his wife Karen, a nurse, were the first team to come by private boat from Mayne to Saturna to offer 24/7 emergency care. They were replaced by Dr. Kenny and his wife Julie.

Dr. Janice Mason, from 1998 to 1999 was the only doctor is residence, providing regular office hours and on call services. Dr. Dixon Warren, a semi – retired physician living on Saturna, also provided medical coverage at times when needed. From 1999 to 2003, Dr Myers and Dr. Losier (from Mayne Island) provided weekly hours under contract with the capital Health Region (CHR). In 2003, Dr. Don Williams from Pender and Dr. Janice Mason (then living on Galiano Island) came by boat to commence regular weekly medical services under contract with the Vancouver Island Health Authority (VIHA).

In 2005, a Recreation and Cultural Centre was built on at 204 Harris Road and the Medical Clinic was added to the building. Drs. Williams and Mason were the first doctors to offer services from this clinic. In 2006, Dr. McColl from Victoria replaced Dr. Mason.

Medical Services on the Island were also provided in earlier days, on a volunteer basis, by nurses who used their skills to fill in where medical services was lacking. Some of these nurses, Muriel ‘Tim” Crooks, Polly Howarrth, Margery Ratlaff, and Hazel Trickey (Piper) worked at the old clinic, made house calls and opened their doors to community members to disperse tender loving care. Hazel Trickey was instrumental along with the health Committee in convincing the CHR to hire a registered nurse to meet the needs of the community.

Laura Paul, a resident of the island was hired by the CHR in 1988, a part time basis to cover Public Health, Home Care and Fist Call. For 10 of the nest 12 years Laura gradually increases the hours and scope of practice of the island nurse. Laura left in 2000 to move to the mainland. VIHA formed in 2001 now became the employer replacing the CHR. There was a three-year gap to the island and was hired as Community Nurse in February 2003. She provided homecare and community education, working until her retirement in February 2005. Lorna Archer-Quinn took on the position in July 2005. First traveling on a weekly basis from Victoria and then taking up residence on the island in 2007.