The Saturna Women’s Service Club (SWSC) started out as the Saturna Women’s Institute and was incorporated on October 21, 1933. By the early '40s the club had become more service oriented and the name was changed to better reflect their mandate. The club provides support to the community of Saturna Island as a whole and to individuals when other organizations are unable.
There has always been a very large social aspect to the club. In the beginning, the ladies would meet each month at someone’s home in the evenings or at the community hall in the afternoon. They enjoyed tea and sweets together and discussed where their funds would be spent in the community. Activities undertaken in the early years included card parties, singing as a group, quilting and crafting to be sold at the Lamb BBQ or donated to the Lady Minto Hospital Auxiliary on Salt Spring. They would hold teas in support of the Red Cross, organize dances, host community dinners where venison was served and hold pancake breakfasts. On sports day the ladies provided hot dogs and drinks at the school. Spelling bee prizes where purchased from the proceeds of a published SWSC cookbook. A favourite activity was arranging Halloween and Christmas parties for the Saturna children.
In 1954 the ladies initiated the building of the stage area for the community hall by calling for “pick and shovels” to start the excavation and provided $500 toward its construction. They also covered the cost of major kitchen appliances, equipment replacement and renovations. The ladies would clean the hall regularly and pay for firewood and water to be delivered before an event.
Through the Foster Parent Plan in the '70s, the club fostered a young boy named Reynoldo in the Philippines. He would write frequent letters to the club; one of which included a picture of him in his Boy Scout uniform. A collection box was passed around at meetings and the money was donated for his education.
The Easter Bake Sale and Raffle became the annual fundraising event which included a large assortment of baked goods, a plant sale, tea service in the lounge with Welsh cakes and a cake walk for the children.
The SWSC were staunch supporters of the Lamb BBQ and ran the coffee and tea booth for many years. They donated burlap feed sacks to skirt the bottom of the fairground booths and painted them with colourful motifs.
Each September the SWSC held a Fall Fair displaying all kinds of homemade goods. As a reward for their volunteer work throughout the year, the ladies would travel to Victoria to enjoy a luncheon on the Princess Mary.
Some of the earliest members included Lorraine Campbell, Lou Money, Marie McMahon, Marie Mackie, Margaret Fry, Joan Ralph, Daisy and Anne Bavis, Marjorie Ratzlaff, Betty Carpentier, Stella Coutts, Irene Lawson, Dorothy Campbell, and Bernice Crooks.
A sub committee was formed to visit community members in the hospital and the Sunshine committee sent cards when someone was ill or had lost a family member. Kits were made up for the ambulance containing money and personal hygiene items for people who would accompany a loved one off island in an emergency. There was also a fund established for battered women who may be in need, especially for transportation off island..
Currently SWSC provides a light lunch after the Remembrance Day Ceremony and memorial teas by request of the family when someone passes on. We continue to hold the Annual Easter Bake Sale, Raffle and Tea and to host a community dinner in the fall. New residents of the island receive a welcome package put together by the club with important information about the many organizations on Saturna. A jar of homemade preserves is included in the package.
An annual education award is given out in the memory of Lorraine Campbell to a Saturna graduating high school student. At year end, the elementary school students are given books for their summer reading. The club distributes Christmas hampers to people who are alone over Christmas.
The club continues to support the community hall, Saturna Recreation and Cultural Centre, the school, the medical clinic, the ambulance, First Responders and the volunteer fire fighters. SWSC works cooperatively with the Lions Club, Parent Advisory Committee and the Saturna Community Club. This congenial organization is open to all Saturna Island women. 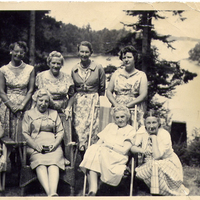 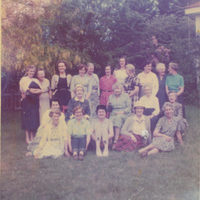 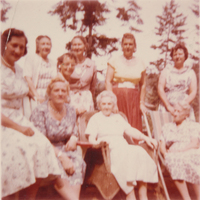 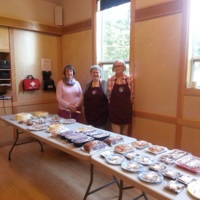